The NYS economy depends on clean water, air, soil and consumer confidence. While there may be a statewide ban on fracking in effect, the by-products continue to make their way into New York State. Re-use and disposal methods for solid and liquid drilling waste include road spreading (for de-icing, dust control, road stabilization), treatment by wastewater facilities, and landfill disposal.

More than 500,000 tons of fracking waste have been transported to New York landfills from Pennsylvania since 2010. And since mid-2011 road spreading of oil and natural gas production brine and natural gas storage brine has been approved for use on roads in portions of at least 41 municipalities & 15 counties. 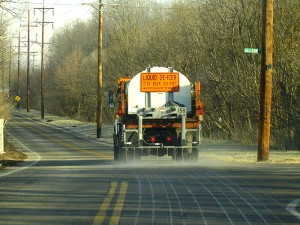 Brine testing results revealed extremely high levels of chloride, which can corrode infrastructure and harm aquatic life and vegetation. Other harmful pollutants in waste include chemical additives, heavy metals, and normally occurring radioactive materials. Exposure to these contaminants in fracking waste could harm public health. When workers are sick or worrying about a sick family member, productivity decreases and absenteeism increases – both of which are costly for business.

The concern is magnified by a special exemption from the hazardous waste definition in NYS regulations for waste produced by the oil and gas industry. In addition to the risk of not being tracked and handled properly, the loophole also provides a cushion for the oil & gas industry from the costly obligations of appropriate handling practices keeping the costs artificially low. We are not asking to place an extra burden on the oil and gas industry, but that it simply play by the same rules that govern every other industry in the state.

15 counties have already taken the lead to prohibit waste disposal practices, but a statewide moratorium is essential to protect all New York businesses. The byproducts & infrastructure related to shale development must undergo the same scrutiny as fracking.

Legislators need to hear from more business voices who care about environmental responsibility. So what can you do?