Following on tremendous advocacy for community solar and related policy by NYSBC business leaders and ally organizations this past legislative session, NYSBC executive director Bob Rossi was interviewed by Andrea Sears of New York News Connection and the resulting article was featured this week as the top story on their homepage.

Pasting the article below for your convenience but we encourage you to visit the original New York News Connection article here and listen to their 2-minute radio segment at the top with portions of the interview.  That segment was picked up by 66 stations with over four million New York State listeners in total. 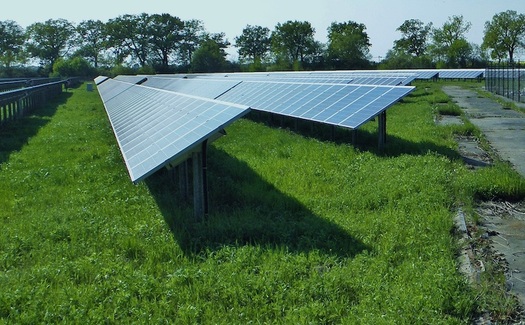 The bill would put the Public Service Commission’s Value of Distributed Energy Resources, or VDER, plan on hold for three years.

Net metering and VDER are methods of calculating compensation for smaller energy sources such as solar installations for the power they feed into the electric grid.

Bob Rossi, executive director of the New York Sustainable Business Council, says restoring net metering will make solar power accessible to all New Yorkers, including almost half of state residents who rent their homes and can’t install solar panels on their property.

“It gives them access to the energy savings by joining a community solar farm, and under VDER it’s just not possible for most people,” he states.

The PSC says VDER was established to fix a flaw in the net metering system and to support the state’s Reforming the Energy Vision strategy.

But according to Rossi, since the plan was rolled out last year, new solar installations have slowed significantly because VDER makes it difficult to calculate a long-term rate of return on the cost.

“Investors are wary of VDER because it’s a complex formula, it’s not transparent,” he states. “And it’s estimated that we’re looking at close to a billion dollars in lost investment in solar in New York state.”

Rossi says the slowdown in solar installations has also deferred the creation of more than 1,000 solar jobs in upstate New York alone.

Wednesday was officially the last day of the legislative session, and by news time the bill had not come up for a vote in the Senate. But Rossi says even if the Senate doesn’t act, there is another way to restore net metering.

“If the bill doesn’t go through, we are still looking to our governor and the Public Service Commission to find a solution,” he stresses.

The bill also calls on the PSC and Long Island Power Authority to create a fair and accurate way to compensate for distributed energy by 2021.