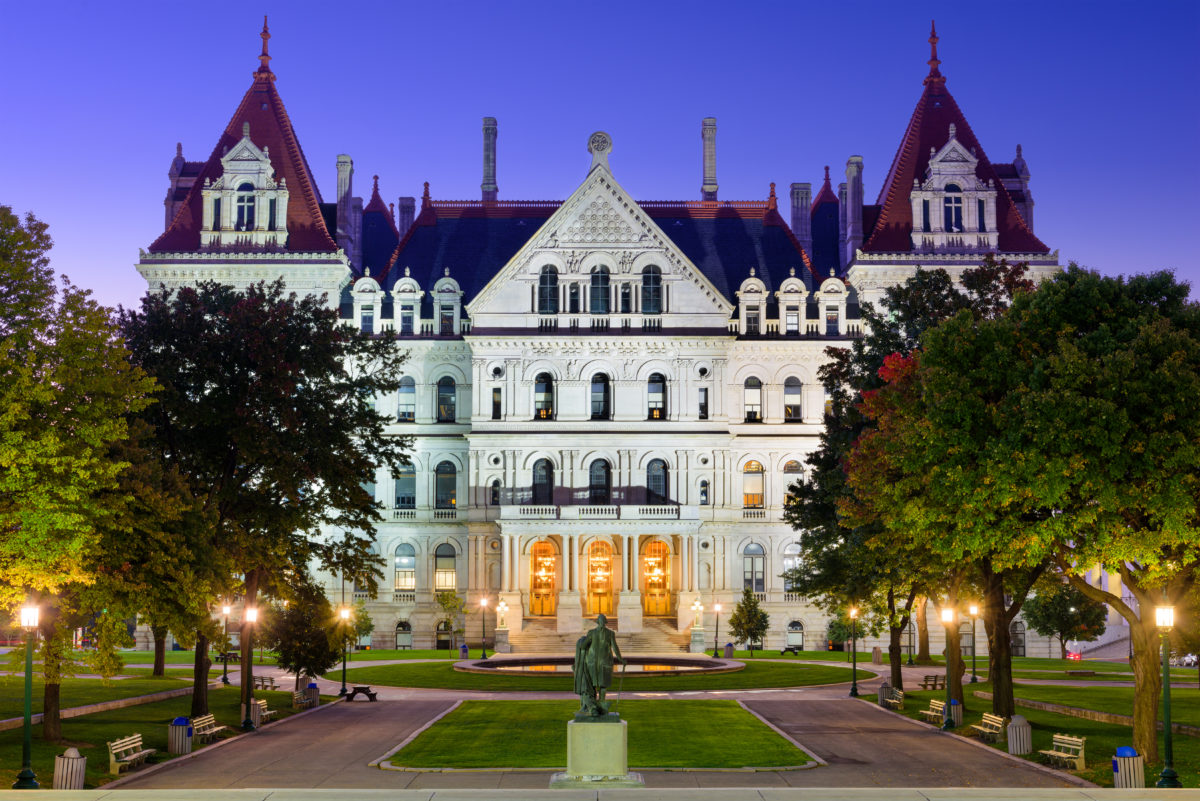 Yet another example where doing right by our people and our environment will strengthen our economy.  That’s how the triple bottom line works, folks!

Summing up… A recent economic analysis predicts that the Climate & Community Protection Act (CCPA), which is again before the NYS legislature, “will support… an average of about 150,000 [jobs] in each year over the first decade.” What’s more, these would be well-paying, mostly working class jobs in energy efficiency and renewable energy. The fossil fuel industry continues to claim that the CCPA will kill jobs, but they represent only “about 13,000 workers” in NYS and the CCPA includes funds for transitioning those workers to clean energy jobs.

I’d like to add that — if done right — the new renewable energy and energy efficiency jobs should be mostly with NYS businesses, which would further strengthen our economy. In contrast, our ongoing investment in the fossil fuel industry diverts money out of our economy through those predominantly out-of-state corporations.

Fascinating stuff that could transform New York State. This article covers a lot of the findings from research conducted by the University of Massachusetts Amherst’s Political Economy Research Institute (PERI).
Read the article in full here.

The verdict on VDER is in and a new fight for EQUITY and RENEWABLE ENERGY begins.

New York’s Public Service Commission (PSC) regulates the value of distributed energy resources (VDER) such as community solar. The PSC — which has 3 people plus 2 empty seats — voted today to approve the regressive VDER regulations, which they claim achieve “a major milestone in the Reforming the Energy Vision (REV) initiative by beginning the actual transition to a distributed, transactive, and integrated electric system.”

The problem is the new regulations place greater power in the large utilities and grossly undervalue the energy created by community solar systems making those systems even more difficult for YOU to finance. Most small businesses and low-to-middle income people NEED the community solar option if they want to invest in clean renewable energy. We need a regulatory framework that sparks a revolution of shared solar across the state. We are ready for it!

More to come on how we can push for incentives that help level this playing field. How else will we achieve our Clean Energy Standard of 50% by 2030? The true path is FORWARD.

The time has come for our state and national leaders to step in and put an immediate stop to the further development of the Spectra AIM (Algonquin Incremental Market) gas pipeline — recklessly located within 105 feet of vital structures at the Indian Point Nuclear Power Plant and not much more than 1,000 feet from the reactor itself.

It is surprising — to say the least — that approvals were granted for a commercial enterprise that puts an aging nuclear facility — already considered an environmental risk — in unnecessary danger. For if the pipeline were to explode, as Spectra’s line in Pennsylvania did last April, the entire plant could be engulfed — with catastrophic consequences — according to Physicians for Social Responsibility.

The $876 million AIM expansion of the existing Algonquin pipeline system, which runs through New Jersey, New York, Connecticut and Rhode Island to eastern Massachusetts and transports close to 3 billion cubic feet of natural gas a day, will move some 342 million cubic feet more. It calls for adding a 42-inch pipeline that will traverse the Hudson River between Stony Point in Rockland County and Buchanan in Westchester County, home to Indian Point.

Had we understood the implications sooner, we might have had more leverage with state and federal authorities in arguing to stop further development of the pipeline. However, while it is late in the game, it is not too late. It can’t be, because public safety is at stake, particularly among more vulnerable populations. That’s why so many members of the New York State Sustainable Business Council have joined the struggle against the pipeline.

Gas pipelines have a spotty track record for safety, at best, and the consequences of a rupture at Indian Point are horrific to contemplate (there were 143 gas transmission line incidents in the United States in 2015, according to the Pipelines and Hazardous Materials Safety Administration). Of course, there ought to be extensive emergency protocols, safety and evacuation plans in place before Spectra AIM goes into operation. There are not.

The nuclear plant’s required evacuation plan covers a 50-mile radius and includes much of New York City. It makes no provisions for a gas explosion. Residents as far west as Port Jervis, as far north as Rhinebeck and as far east as Danbury, Conn. would be affected.

The Spectra AIM fracked gas pipeline epitomizes federal regulators’ ongoing disregard of the risks to climate, public health and the economy associated with the gas and oil industry’s fossil fuel extraction and infrastructure. These regulators have routinely ignored the continual protests of ordinary citizens, elected officials —including our own governor, national organizations such as Physicians for Social Responsibility, New York’s Riverkeeper and others calling for thorough independent risk, safety and health assessments.

So far, the Federal Energy Regulatory Commission (FERC) has not listened, and plans to allow the AIM pipeline to be operational in a matter of days or weeks.

The time has come for our state and national leaders — including U.S. Sens. Charles Schumer and Kirsten Gillibrand, Gov. Andrew Cuomo and President Barack Obama — to amp up the pressure on FERC by speaking out loudly and without delay, demanding a stop to the AIM pipeline now and an immediate implementation of a national energy policy that expresses an undeniable commitment to clean, renewable energy and rejection of further fossil fuel development.

We must avoid the temptation of further fossil fuel development: Its economic gains are proving to be short-term and its losses infinite. This is imperative to our survival.

Ajax Greene is president of On Belay Business Advisors and chairman of the New York State Sustainable Business Council.

Published in the Albany Times Union on November 30, 2016